You are here: Home / Blog / The History of Mobile Bay & Fairhope, AL 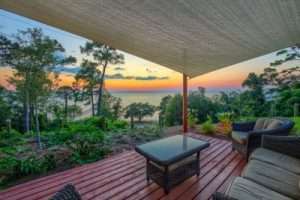 Situated on historic Mobile Bay in Fairhope, AL, Jubilee Suites’ 200 feet of beachfront provides the focal point for many of our guest experiences here at the hotel. The Bay is teaming with fish, shore birds, and occasionally dolphins and even manatees. Locals in Fairhope live a waterfront lifestyle- fishing, boating, kayaking, biking, walking, picnicking, and sunset-gazing along the Bay’s shores. It never grows old. Each evening Jim and I gather with our guests around the firepit to celebrate the remarkable sunsets over the Bay here at Jubilee Suites and watch the birds come in to roost in the tall trees. When we decided to build our home and boutique hotel here, we already knew that the Bay was a local recreational treasure. What we’ve learned more about since then is that Mobile Bay is also a captivating historical subject and part of the Civil War Trail. Whether you’re looking for an historical or ecological tourism destination or you’re already here enjoying the scenery with us at Jubilee Suites, we think you’ll like learning more about Mobile Bay and the history of Fairhope, AL. 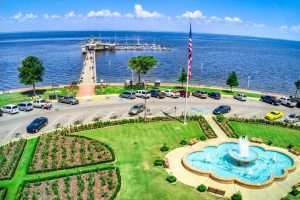 We wanted to provide some local history for our guests to access on the TV’s in their suites, so with the tremendous help of a local history buff, we put together a 7-Part Video Series on the History of Fairhope, AL, available on our YouTube channel. We couldn’t have done this remarkable series without the generous gift of time on the part of Dean Mosher, America’s historical artist, Fairhope resident, castle-builder, historian, storyteller and the author and narrator of all the videos in this series. Today his large-scale historical murals hang in the Air and Space Museum in the Smithsonian, the Naval Academy, the Fairhope History Museum and other esteemed venues around the world. Throughout the video series you will see prints of many of Dean’s paintings representing significant historical moments on Mobile Bay, moments that changed history. You won’t want to miss these videos! 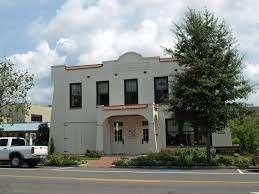 If you like learning about local history when you travel, you’ll like going downtown to visit the Fairhope Museum of History. The Museum packs a lot into the original city hall building, offering programs and exhibits to tell the fascinating story of Fairhope. Beginning with Native American settlers, to the economic reformists who arrived in 1894 with the goal of creating a single tax utopia, to the present day eclectic personalities who make life interesting for the rest of us, there’s something for everyone. Don’t miss the huge collection of artifacts and exhibits on the history of Fairhope and the people who settled here over 125 years ago. Kids will enjoy the museum too. Look for the display about the jubilee phenomenon on Mobile Bay and be sure to take pictures of them inside the historical jail cell.

Learn more about our amazing Mobile Bay from Mobile Baykeeper, which exists to advocate for the Mobile Bay Watershed and Coastal Alabama, protecting clean water, clean air, and healthy communities.

The Mobile Bay Watershed encompasses 65% of the land area for the state of Alabama, along with portions of Mississippi, Georgia, and Tennessee. Mobile Bay is the end-point for the Mobile, Tombigbee, Black Warrior, Alabama, Coosa, and Tallapoossa Rivers. The watershed is a vast network of more than 250 separate waterways, including rivers, bays, creeks, bayous, lakes, cutoffs, branches, and sloughs.

A 40-mile-long braid of rivers and bayous spreads over cypress swamps, bottomland forests, marshes, and bogs to form the unrivaled Mobile Tensaw Delta. The expansive Delta is considered one of the most biologically diverse ecosystems in North America – “North America’s Amazon.” It opens into the northern end of Mobile Bay in an area called Five Rivers, which consists of the Mobile, Spanish, Tensaw, Apalachee, and Blakeley rivers. These rivers, carrying millions of gallons of water, conclude their long odyssey as they pour into Mobile Bay. The Bay is approximately 32 miles long and 23 miles across at its widest point. The average depth in Mobile Bay is only about 10 feet, which makes it one of the most shallow bays of its size. (From the Mobile Baykeeper website.)

Mobile and the Civil War

Admiral David Farragut’s famous quote, “Damn the torpedoes, full speed ahead,” was said the day he bravely (or foolishly) dodged a disaster in mine-studded waters and successfully took Mobile Bay for the Union during the Civil War. Following the Battle of Mobile Bay was the Battle of Fort Blakeley, fought from April 2 to April 9, 1865, which was one of the last large land battles fought in the Civil War. After this battle, the port city of Mobile, AL surrendered to the Union on April 12, 1865 and the Civil War officially ended on May 9, 1865, less than a month later.

About 15 miles up the road from Jubilee Suites you can visit Historic Blakeley State Park, the site of the battle. The park encompasses more than 2,100 acres in the largest National Register Historic Site in the eastern half of the United States. See the remnants of one of the oldest towns in the state of Alabama, the Town of  Blakeley. There is also evidence of American Indian habitation from the Archaic, Woodland, Mississippian, and Historic periods. There is a lot to see and do at Blakeley so plan a day of it. You can bring the family to picnic, hike, ride horseback, kayak, and more. For more information, visit the park website. 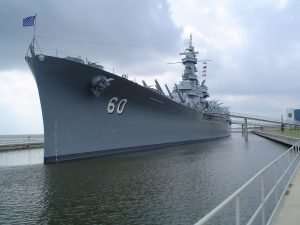 For even more military history while in the area, you must add a self-guided tour of the USS Alabama Battleship to your list of field trips. In 1965 the battleship was placed in its current home in Mobile Bay as the anchor for the Veterans Memorial Park.

She began her World War II adventures in the North Atlantic in 1943, then later that year, went to the South Pacific seas… Home to a crew of 2,500 courageous Americans, this 45,000 ton war machine’s WWII adventure culminated with BB-60 leading the American Fleet into Tokyo Bay on September 5, 1945. Nine Battle Stars for meritorious service were awarded the “Mighty A” during her brief three year tenure as the “Heroine of the Pacific”. (From the USS AL website.)

While at the park you can also tour the USS Drum and take great Instagram selfies with tanks, planes, and artillery used in World War II, Korea, and the Vietnam Wars. For more information visit their website. For an authentic local experience, plan on having lunch or dinner at one of the Gulf seafood restaurants on both sides of the Causeway (Hwy. 90/98 East/Battleship Parkway) leading to the park.

What lies beneath the surface of Mobile Bay is just as interesting as what is on the water. From a 2017 article in Mobile Bay Magazine:

… A 1983 Mobile Bay cultural resources survey commissioned by the U.S. Army Corps of Engineers documented 282 shipwrecks dating from colonial times to the survey year. Some of the vessels listed were already famous in their own right — none more so than the USS Tecumseh, sunk by a torpedo during the Battle of Mobile Bay. The Tecumseh’s grave is easy to spot. It’s marked by a buoy just off Mobile Point, where the vessel rests upside down in about 40 feet of water, covered by a layer of mud. There are 93 Union dead still aboard her, and the U.S. Coast Guard protects the site against damage or looting.

The newest find in 2018 was the Clotilda, the last known slave ship to come from Africa. Owned by the Meaher family, it brought 110 African slaves into Mobile Bay  in 1860 in defiance of a federal ban on the importation of slaves that had been in place for 50 years. Because it was a crime, the owners hid and burned the slave ship and lied about its location so no evidence of it would remain to prosecute them. But with lots of original research and determination, the Clotilda was eventually tracked down and discovered by Ben Raines near Twelve-Mile Island in the Mobile-Tensaw Delta. Ben has written a book coming out in January 2022, Finding Clotilda – A Story of Reconciliation, about how he found the ship. It also teaches the history of the small community of Africatown where the descendants of those smuggled slaves still live just north of Mobile, about five miles from the shipwreck.

What’s next for the Clotilda? The state of Alabama has set aside a million dollars for further excavation to determine if the Clotilda can ever be raised from the riverbed. The ship may be too damaged or the effort too expensive. There is also a plan is to build a Welcome Center in Africatown to tell the story and display a Clotilda replica and artifacts:

Four million dollars has been dedicated for an Africatown Welcome Center in a vacant lot across from the cemetery where those brought here by Clotilda are buried… If all the dreams and proposals come to fruition, Africatown is poised to become one of the most important stops in the burgeoning Civil Rights tourism industry. Residents hope the economic impact will rescue Africatown from its death spiral. (From the Lagniappe newspaper article by Ben Raines) 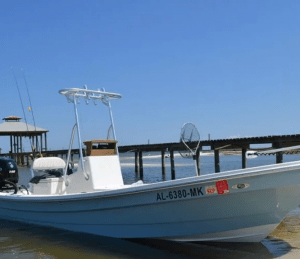 To get up close and personal with Mobile Bay, try a charter boat tour. Ben Raines, also the author of  “Saving America’s Amazon: The Threat to Our Nation’s Most Biodiverse River System”, offers a variety of full-day in-depth boat tours of the Mobile-Tensaw Delta, perfect for families or small groups. You’ll find his remarkable book in every one of our suites here at Jubilee Suites. In it, Raines details the unique biodiversity we have in AL and calls on the state to do a much better job of protecting it. “Alabama ranks among the most diverse places on Earth. Our forests and streams are home to twice as many species per square mile as any other state. Alabama ranks number 1 nationally for the number of fish species, turtle species, crawfish, mussels, snails, salamanders.”  To schedule a private boat tour, contact Captain Raines through his website.

For another option to see the Bay up close from aboard a small charter boat, call Captain Chris Tew at Southern Exposure Inshore Charters. He’s a multi-talented Mobile native and has a wealth of knowledge about both fishing and the history of Mobile Bay. Whether you go sightseeing or fishing- or both, you’ll enjoy a shorter trip on the water with Captain Chris in his 23′ Panga, which holds 4 adults comfortably. But call at least a week or two in advance, because he books up quite early. If you stay here at Jubilee Suites, Capt. Chris will also pick you up right from our beach.

Can’t get enough Civil War history? Explore part of the Mobile Bay Civil War Trail with visits to Fort Morgan, Fort Gaines and Fort Conde. Each of these historical AL forts are within a short drive from Jubilee Suites, perfect for one or more day trips, while also seeing more of the beautiful towns in our area. 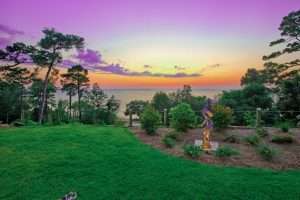 If you are a history bluff, this is the trip for you. Visit Jubilee Suites in Fairhope, AL and make us your home base for luxurious accommodations right on Mobile Bay while you enjoy all our area has to offer. Book your stay today in one of our 1 or 2 bedroom suites, and enjoy an intimate home-away-from-home experience. We can’t wait to meet you!

Serving Southern hospitality to everyone we meet. Our motto is, "There's a Jubilee happening every day. You just have to look for it!"